My dad was born and raised in Formia, near Naples.

His first love was Italian cooking – a love he continued when he moved to Edinburgh to work as a chef in 1958.

Working his way round some of the city’s most renowned restaurants gave him the appetite to establish his own! So he did, and set up his first restaurant close to the Edinburgh Playhouse theatre in 1965.

Earning quite a reputation for its authentic, classic cooking meant that he soon outgrew the place. So, ‘Cosmo Ristorante’ moved to larger premises in Castle Street in the early 70’s. 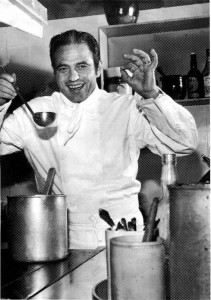 Cosmo Senior in his kitchen!

In true Italian tradition, my dad passed all his skill and passion for classic cooking (and pizzas of course!) on to me, Cosmo Junior, and my sister, Tina.

The company grew. And so did the family! We now make our pizzas in a slightly larger premises in Newtongrange. Not through choice, but through necessity, as more and more pizzas were demanded!

I now oversee everything that goes on at Cosmo’s. Although trying to keep my dad out of the kitchen is always tricky. But then, like me, it’s where he feels most at home!

For a more in-depth knowledge of the family, like our Facebook page and take a look at our Timeline – http://www.facebook.com/cosmospizzas

Made the family way

Lovingly made in Scotland, all of our pizzas at Cosmo’s are made using more traditional methods of dough preparation, unlike some larger manufacturers.

Why? Because that’s the way my Dad has always made them!

The key to flavour and lightness in our pizza is that we use a traditional mother dough which is simply flour water and a little yeast. Resting for many hours the dough becomes mature with a lovely aroma. This is the start of the dough’s long journey to the oven. 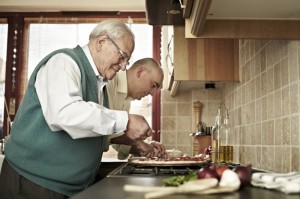 All our vegetables and meats are bought daily. And we work with some of Scotland’s leading producers to bring you what we feel are among some of the finest tastes in the World.

And what of our smooth, delicious and distinct tomato sauce? I can’t tell you much about that, because it’s a secret family recipe, and I don’t think my Dad would never forgive me! But you can rest assured it tastes great.

If you want to see the whole range of tempting toppings to choose from, and where you can get your hands on them, click here.