2 Weeks ago, I made a dough.  I put it on the farthest, coldest recesses of my refrigerator and forgot about it. Yesterday, I pulled it out. It had been sitting in a state of cold fermentation for about 300 hours.  It was once a proud, strong dough. Now it sat like an old man flopped on a park bench. It’s best days were gone. The yeast had eaten the simple sugars over the past 14 days and the played-out gasses that initially pumped its chest out toward the sun, were gone.

I usually use old dough like this as a nice “kicker” to a new batch of Ciabatta dough, but as I pulled this dough off the tray, the condensation and extra virgin oil dribbled off and that beautiful, fruity smell of fermented wheat hit my nostrils screaming, “Bloody hell, I’m still good, BAKE ME!”  So I did.

I gently formed a disc, then micro planed some Parmigiano Reggiano on the dough. Then I dressed it with fresh basil and fresh mozzarella. After the cheeses, I put some San Marzano tomato on for sweetness. Then I got cheeky and came off the traditional path with some paper thin slices of Lardo that would melt all over this beauty. Then I put it into a 250C oven and baked it for nine minutes. The leapording on the bottom was nice even though I baked it on a pizza screen. The crumb was spectacular with nice, irregular open cells and a crispy crust with no gum line.

Like any old man, it’s rise was slow and predictable unlike the unruly younger dough’s, it nevertheless made up for this in complexity as every bit of the grain came out as a forceful wheaty-malty taste deep in the back of my throat and then left a caramel aftertouch in it’s wake. But best of all, this old man who once sat floppily on a tray in my fridge turned his twilight years into a treat for me and my wife.

There might just be some life in the old dog yet 😉 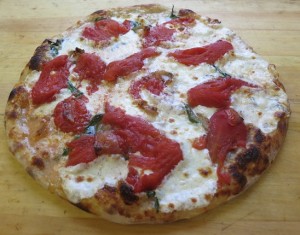